„The film shows Ian, an English teacher living in Switzerland, and Valeria, one of his final year students, on five days over the course of a school year. During the year, both have to cope with an increasing amount of pressure in their professional and private lives: Valeria does not have the required marks to go to university and does not really want to go either despite her parents’ plans for her, and she is bullied at school after a new student comes into the class. Ian finds it difficult to adapt his style of teaching to a growing number of educational regulations, and he is shocked to learn that a friend of his tries to commit suicide for similar reasons. Both narrowly escape a burnout by getting help in the nick of time.“

The script to the film was written in collaboration with 50 teenagers,who were interviewed about their experiences of high school life and stress in their private lives. After an initial research period with all 50 students, half of them (class 2b) created Valeria’s story and wrote the first draft of Valeria’s half of the script. This included classroom and peer group discussions to come up with a basic story and the order of scenes, as well as team writing and some dialogue work. The other half (class 2d) edited the story and contributed more details, including whole new scenes. A special focus was on natural sounding dialogue.

Some of these students are part of the cast and crew as well. 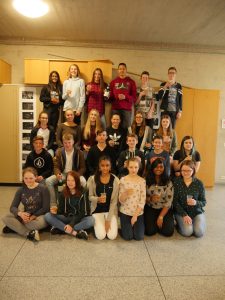